When my mother was 69 years old, she slipped and fell out of the house in the winter. She didn’t fall much as she leaned on her arm and broke it in two sites. Doctor put her a cast and prescribed calcium based medications. Unfortunately, we are not always attentive to our parents, sometimes we don’t care enough about them. And they are sick but silent, trying not to bother us with their illnesses. Filial feelings awaked in me, I wanted to help my mother and buy the very best medicines, so that she recovered as soon as possible. Therefore I appealed to the best doctors in Penza. It turned out, that the choice of calcium based medicines is huge. The price range is huge too. But what confused me, when reading recommendations for use to these medicines, that calcium, as it turned out, is not harmless. When we take calcium medicines to increase bone mineral density, calcium deposits not only in bones, but in other organs, particularly, in kidneys that leads to stone formation, and in vessels that increases their fragility and so lead to a possible stroke. Good choice, nothing to say, thought I, to die from stroke or from osteoporosis? What is the treatment, if so?

A little while later, God brought me to two remarkable people. The first of them is Trifonov Viacheslav Nikolayevich, pharmacist, Honored Teacher of USSR who taught all his life in Kemerovo Pharmaceutical College, lectured on human physiology, devoted many years to medicinal herbs and herbal therapy, and created a new method of processing medicinal herbs using cold technology that makes it possible to use a herb as a whole, not some parts of it, in the form of extract or decoction. The brand of products is called “Secrets of Longevity”, if you see it in pharmacies, know who is its author. I use myself “Valeriana P” from the series “Secrets of Longevity” – it has such odor! – you don’t even have to take pills, it is enough to fall asleep! Now he is 70 years old, but he is full of vitality and energy. The second person is Villory Ivanovich Strukov, Doctor of Medical Sciences, Professor. He is excellent doctor who is engaged in the study of osteoporosis all his life, author of many textbooks and monographs about this disease. I introduced them to each other. Since then, the discovery is began, in which I took some part.

Have you ever thought, why women suffer from osteoporosis more often than men? Why does osteoporosis mainly affect aged people? The answer to this question has long been known to researchers. The reason for this is a change in hormonal status, decrease in levels of androgens and the main hormone – testosterone. Women have several dozen times less testosterone than men, and therefore even a significant decrease in testosterone level opens the gap through which calcium begins to leave the body.

The calcium medications that are present in the current market are aimed only at making up the loss of calcium. Figuratively speaking, it is the same as trying to pour water in a leaky barrel. How to stop calcium loss?

To solve this problem, therapy with medicines containing testosterone was proposed. But the implementation of this theory in practice did never find wide application, since hormone replacement therapy may cause pharmaceutical castration.

What is the way out of this situation? What if you give the patient not testosterone itself but a substance, from which the body will build testosterone, and so to reduce the way of testosterone synthesis. After all, it would be faster to cook minced meatballs than to start cooking from the hike to the market for meat. Being physiologist, V.N.Trifonov selected just such a substance – drone brood. Many beekeepers aware of its effects use drone brood to increase sexual activity. Drone brood, saturated with vitamins, amino acids, micro- and macronutrients, has androgenic activity and maintains hormone levels in both male and female bodies. The study of drone brood showed its high biological value, and most importantly that the use of drone brood prevents the decrease in testosterone level in human body. Thus, it became possible to eliminate the cause of osteoporosis – to close the gap, through which calcium leaves the body.

However, the life of drone brood is only a week. Where to get it later? How to preserve it? Then doctors of biological sciences Krivtsov Nikolay Ivanovich and Burmistrova Lilia Alekseyevna from Ryazan came to help us. It was they who invented the method of preservation of drone brood saving all its properties. 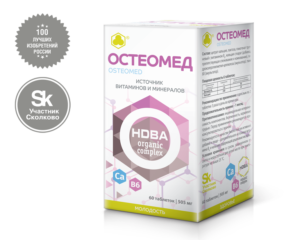 As a result of these joint efforts, the supplement OSTEOMED was created. To start using it, it was decided to register it as biologically active dietary supplement. The study was conducted under the direction of V.I.Strukov. As it was presumed earlier by its creators, OSTEOMED was successful in preventing calcium removal from bones, and a small content of calcium citrate in OSTEOMED was to increase bone mineral density.

The core of the world discovery is that OSTEOMED first of all fill cavities in bones. Other medicines increase bone mineral density as such. Both existing and new formed cavity formations in metaphyseal (trabecular) bone sections remain unchanged or still increase in number and size. Such cavity formations reduce bone strength, increase the risk of injury under various loads, and OSTEOMED is primarily aimed at the restoration of bone tissue, its action aims at closing cavities.

This is the essence of the discovery. The studies proved its 5-fold superiority in filling cavities in comparison with already existing calcium medicines which, as noted earlier, only increase bone mineral density. Thus, maximum benefits with minimum adverse effects. Now there is no such dilemma – to die from osteoporosis or from stroke.

In conclusion, I would like to ask for your assistance, dear pharmacists. Tell everyone about this discovery! And maybe then it will save somebody’s life and our parents will be live longer.

With hope for assistance

Cavity in osteoporotic bone before the treatment with “Osteomed”

Cavity in bone is closed after the use of “Osteomed”

Compaction on the site of bone cavity